Passengers travelling in Vintage Trains’ premier dining cars sometimes ask about the ‘carriages’ they are travelling in. Thanks to our Archive, and some extra research, there is a lot we can tell them.

The first is that they are ‘cars’, not ‘carriages’. The Pullman Car Company was originally an offshoot of the American organisation of the same name. It then became a British company, then a subsidiary of the Railway Executive. Finally, it merged into BR’s Hotels and Restaurants division and became a branding (reduced to “Pullman”) used by British Rail to attract business customers. American terms stuck with Pullman throughout these changes.

The Pullman idea was one of luxury – at a price. 1962 saw the greatest range of Pullman services in Britain, after which the brand declined and finally disappeared in 1978, until revived as a high-end leisure experience in the late 20th century.

People paid for the Pullman service by (a) a supplement, and (b) charges for the ‘sustenance’ (food) and ‘stock’ (drinks) consumed on the journey. 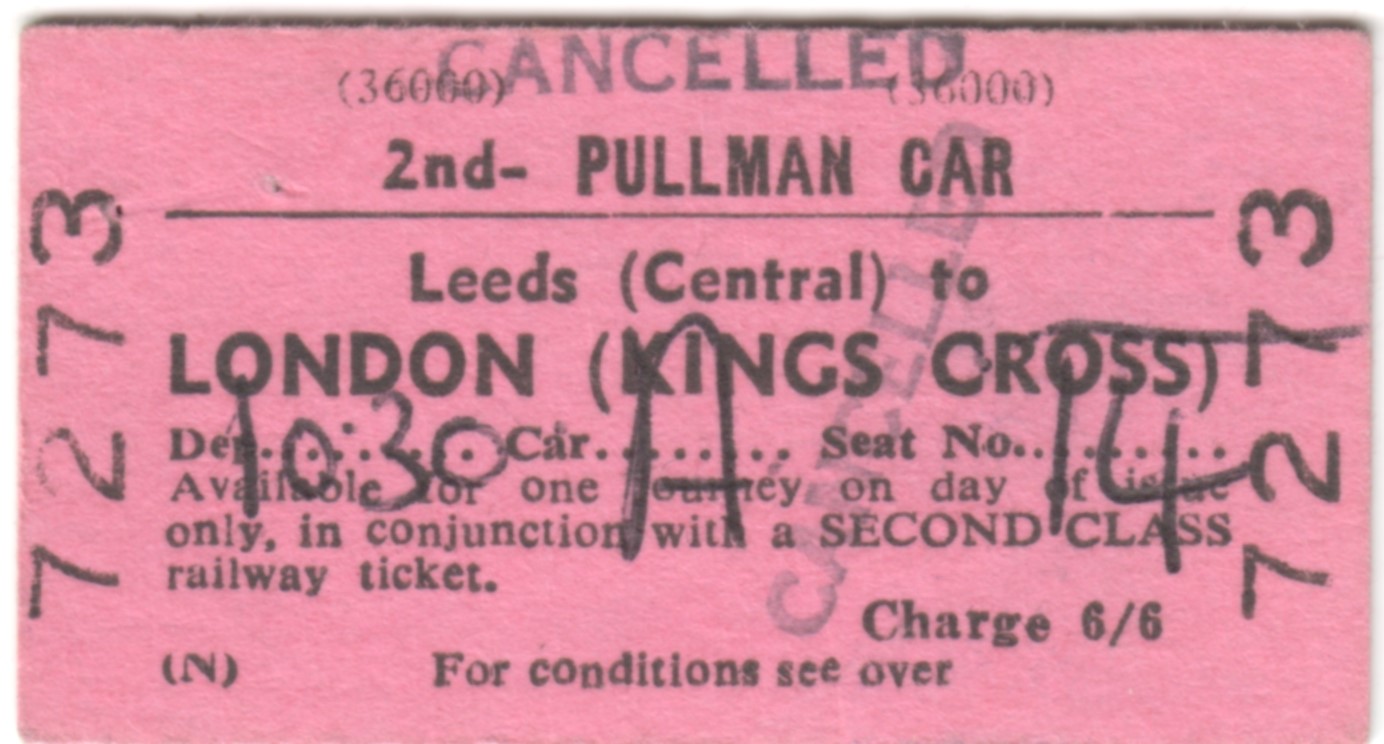 Metro-Cammell of Washwood Heath won the Pullman Company’s order for 44 new Pullman cars for delivery in 1960-61. The contract was for nearly £750,000 (£17 million in today’s money). The new cars were to replace the stock built by a predecessor of Metro-Cammell in 1928 for the LNER, which ran the Pullman services on the East Coast mainline. All the Pullman Cars in the Vintage Trains collection are from this contract (Metro-Cammell Lot No. 3280), and our two currently running Pullman cars worked on services out of Kings Cross in the 1960/61 timetable.

The above 44 cars (21 First Class, 22 Second Class, and 1 Bar) were the last painted umber and cream, and the only Pullmans based on British Railway’s Mark 1 coach body. The old 1928 stock went to the Southern Region, and the cars they replaced became camping coaches.

High-Speed Trains on the East Coast mainline meant the end of separate Pullman stock. The Second Class Pullman cars were retired in 1969 and the final First Class services ran on 5th May 1978. The cars were then scrapped or given new leases of life. Of the 44 built in 1960, 26 are preserved. Four are at Tyseley, two of them are operational.

The first thing that passengers notice is the vestibule doors opening inwards (the American influence), followed by the roominess of the accommodation.

With just 30 seats (Kitchen Car) or 42 seats (Parlour Car), arranged in groups of 2 or 4, the overall impression is one of restrained luxury. The Pullman Car Company employed an interior decoration consultant to advise on balancing Pullman tradition with modern trends. The result was a “dignified following of contemporary trends” using a mix of synthetic and natural materials.

The Pullman cars have exceptional riding qualities thanks to their Commonwealth bogies. These feature a single steel casting with complex spring arrangements to spread the load and balance out the vertical, horizontal, and longitudinal forces that arise as trains travel along tracks at high speed. Although their performance was excellent, the bogies had two major drawbacks: they were heavy (6.5 Tons each), and in-service maintenance was complicated.

Car 349 became a First Open in 1970. It was repainted in British Rail’s corporate blue and grey livery and internal fittings were changed to standard First Class design. From contemporary photographs we know that it worked on services from Liverpool Street station to Norwich.

With the Pullman Car Company and British Rail these Second Class cars ran unnamed. When they arrived at Tyseley there were plans to name them, the various suggestions including female characters from Shakespeare. They remain, however, unnamed.

Eagle, in contrast, being a First Class Car, has always carried the name Eagle.